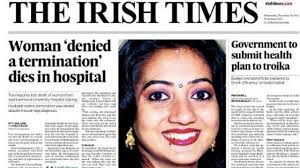 The recent death of a pregnant woman in Ireland has caused huge furore in the polity of the republic. While the exact details of the case are yet unknown many have been up in arms over the claim that the pregnant woman's life was lost as a direct result of the prohibition of abortion in Ireland. Many pro life and pro choice groups have clashed repeatedly and the debate rages on. This series of events resurrected in my mind the thoughts I've had regarding abortion.

Abortion is always a difficult topic and with most difficult topics there usually isn't one right answer. In my mind's eye i can see situations where i will be in favor of abortion. One such instance is that of rape where contrary to Sen. Todd Akin, pregnancy can and does result. Conversely i would be against situations where a pregnancy is unplanned and abortion is used as a form of contraception. Grey areas exist in my mind regarding abortions for fetal abnormalities and severe congenital/ genetic conditions. I can understand why a parent may want an abortion in these cases but I can also see how permitting that would begin a descent down a slippery slope towards eugenics, a practice many will agree is less than desirable.

I believe that a baby has a right to life. The real issue is determining when that life actually begins. Is it when the sperm fertilizes the egg, when the morula is formed, when the fetal heart begins beating or when... i could go on. The bottom line is we don't know and we probably never will. What i do know though is the immense joy children bring into the world often regardless of the circumstances surrounding their conception or the state of their health at birth. Children bring hope and joy, the possibility of change and a new beginning. They also bring lots of poo and tears but we'll gloss over those! Abortion on the other hand in my experience brings adverse emotional and psychological  effects to not a few women. Some psychiatrists argue that research hasn't revealed measurable difference in the mental well being of women who have undergone abortion. I however still have my doubts probably due to the anecdotes i have come across that suggest otherwise.

Finally you ask, so what should we do? legislate for or against it? What i have thought up is an independent panel that consists of legal and medical experts that women can apply to and have their case for an abortion to be heard swiftly. They'll always be available, take into consideration all the potential issues and ramifications and give a decision accordingly. I know this will give rise to many new issues but that's my little stab at the problem. The real answer: I don't know. I spare a thought often for women who have to consider this difficult option.